NOAA’s 2022 Arctic Report Card provides a detailed breakdown of how climate change is reshaping the region and how it is heating up faster than any other part of the world.

This year’s Arctic Report Card also features a chapter about how these environmental changes are felt by Arctic indigenous people, and how their communities are working to address them.

Jackie Qatalina Schaeffer, a co-author of the chapter, director of climate initiatives for the Alaska Native Tribal Health Consortium and an Inupiaq from Kotzebue, Alaska, said, “Living and innovating in Arctic environments over millennia, indigenous peoples have evolved holistic knowledge that provides resilience and sustainability. Addressing the unprecedented environmental change requires listening to one another, aligning values and collaborating together as communities, businesses, governments, Indigenous and non-Indigenous scientists and decision-makers.”

Rick Spinrad, NOAA Administrator, said, “With this important new chapter and other timely additions, the 2022 Arctic Report Card underscores the urgency to confront the climate crisis by reducing greenhouse gasses and taking steps to be more resilient. The report provides observations and analysis to help build a climate-ready nation in a region on the front lines of climate change.”

Compiled by 147 experts from 11 nations, the report card includes three sections: Vital Signs, Indicators and Frostbites. Vital Signs provides annual updates on key topics. This year, a chapter on precipitation has been added, reflecting an improvement in available data and showing the dramatic increase in precipitation across the Arctic in recent decades. Indicators explores topics that are periodically updated, and the Frostbites section reports on new and emerging issues. 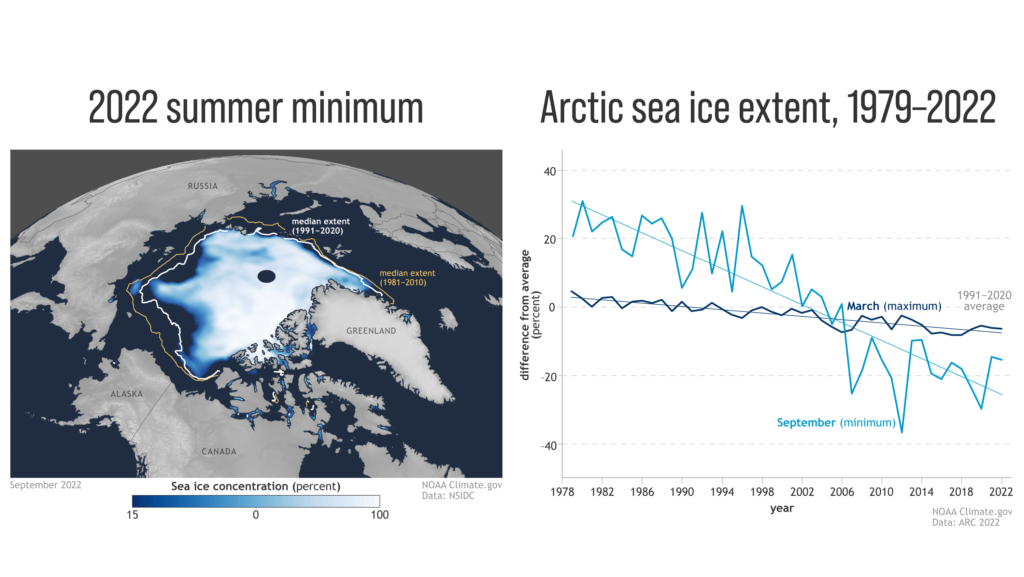 Major findings in this year’s report include:

Arctic annual air temperatures from October 2021 to September 2022 were the sixth warmest dating back to 1900, continuing a decades-long trend in which Arctic air temperatures have warmed faster than the global average. The Arctic’s seven warmest years since 1900 have been the last seven years.

Arctic sea ice extent (coverage) was higher than many recent years, but much lower than the long-term average. Multiyear ice extent, sea-ice thickness and volume rebounded after a near-record low in 2021, but was below conditions in the 1980s and 1990s, with older ice extremely rare. Open water developed near the North Pole for much of the summer, allowing polar-class tourist and research vessels easy access. The Northern Sea Route and Northwest Passage were also largely open.

Satellite records from 2009 to 2018 show increasing maritime ship traffic in the Arctic as sea ice declines. The most significant increases in traffic are occurring among ships traveling from the Pacific Ocean through the Bering Strait and Beaufort Sea.

Wetter-than-normal conditions predominated over much of the Arctic from October 2021 to September 2022. Precipitation has increased significantly since the 1950s across all seasons and data sets. Heavy precipitation events are more common in the North Atlantic subarctic, while much of the central Arctic shows increases in consecutive wet days and decreases in consecutive dry days.

Typhoon Merbok, which was fueled by unusually warm water in the north Pacific, dramatically shaped 2022 in the Bering Sea region. Merbok struck the west coast of Alaska in mid-September, bringing a destructive storm surge that caused homes to break loose from foundations and damaged infrastructure in several coastal and river communities. 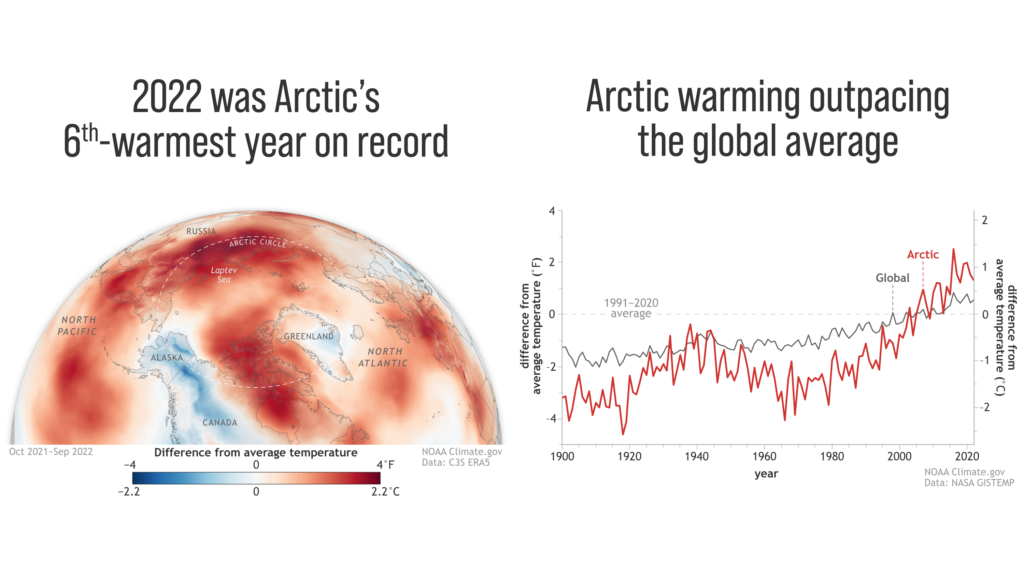 Matthew Druckenmiller, a research scientist with the National Snow and Ice Data Center and the lead editor of the 2022 Arctic Report Card, said, “The Arctic remains a varied and expansive region to monitor, especially as widespread disturbances unfold and seasons shift. To understand its transition, we need local to international partnerships, especially with Arctic peoples and Indigenous communities, who are vital to the use of diverse observations and knowledge, as well as to identifying solutions to long-term climate impacts and abrupt disturbances.”

Dan first joined UKi Media & Events in 2014 having spent the early years of his career in the recruitment industry. As editor, he now produces content for Meteorological Technology International, unearthing the latest technological advances and research methods for the publication of each exciting new issue. When he’s not reporting on the latest meteorological news, Dan can be found on the golf course or apprehensively planning his next DIY project.